Friday:
Somehow, I woke up at 5am. Fiona came to my room to help encourage me to get out of bed but it was still a struggle. Mom drove us to the airport and we caught our flight out at 6:40am. We had a layover in Chicago but stayed on the plane so it was easy.

We arrived in St. Louis around 10:30am and picked up our rental car. On the shuttle bus to the rental car area, we got off the bus and I thought my dad had grabbed my backpack but he didn’t. I raced back to the shuttle bus. The driver held my purple backpack and said, “Yeah I saw someone left this, you look pretty panicked so I assume it’s yours.”

It was too early to check into our hotel so we met up with my aunt and uncle in the Lumiere casino, downtown. We ate breakfast at the casino sports bar where the coffee was lukewarm, service was lousy and the homefries were greasy.

To kill some time, we decided to go to the Budweiser Brewery. It’s great because it’s a free tour. They walk you through the Clydesdale stable, the brew house and you get two free samples.

After the tour, I took a glorious nap and got ready for the wedding.

The wedding and reception took place at Bissinger’s  which is a chocolate factory in downtown St. Louis.
The ceremony was inside due to the rain but was still very nice.
At the cocktail hour, there was of course, chocolates, and many yummy snacks.
The dinner at the reception featured a salad with a caramel dressing, chicken in a chocolate glaze sauce and Ted Drewes chocolate frozen custard. There was not a cake, however later on in the night, there were S’mores.  The s’more S’mores the better! 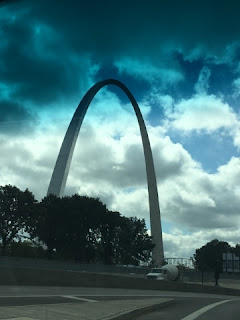 Saturday:
We wanted a better breakfast than the casino sports bar so we went across the street to the Four Seasons hotel restaurant. It was incredibly fancy. Like so fancy they had a beverage server and a food server. I treated myself to the smoked salmon and sincerely enjoyed it.

We went over to my cousin’s Stephanie house for a family get together in the afternoon. She has such nice decorating tastes so I tried to take notes on home decorating tips I could use in my own place. I tried some St. Louis ribs that were quite yummy.

If you’ve gone to Disneyland or Walt Disney World, you’ve perhaps noticed the Hidden Mickey phenomenon. A Hidden Mickey is a Mickey Mouse shaped three-circle design that is somewhere disguised in an attraction or around the park. Some are more obvious than others. Entire books have been written about finding these Hidden Mickeys. Once you find one, you continue to see it every time you return. I wanted to share with you a few of my favorite Hidden Mickeys and funny signs that I always notice at Walt Disney World.

Tomorrow I’m leaving for Disney World! We go there every year so I’m an experienced Disney traveler. For tips about Disney World see this post. For tips about how I pack for my adventure, read on. (Note that some of these packing tips are specific to females.)
How to pack:

What I usually Pack aka Packing list for female Dummies:

All photos taken by me. Admire my awesome point and shoot photography skills.
January 4, 2014April 15, 2018 Debbie
Life Hacks that I’ve learned and used over the years. These will help you stay organized and pack more efficiently.

To best keep old headphones organized, take bits of cardboard and cut them into small pieces. Make a cut on the top and bottom then wrap the headphones around the cardboard. You can also keep them in small plastic containers.

When packing earrings for a trip, pin them onto an old tie. I did this when I went to Denmark for four months. I borrowed my dad’s old tie, chose my earrings, folded it up carefully in my luggage and when I arrived, all I had to do was tie it up somewhere so I could see the earrings. Easy!

To display bracelets, use old toiler paper roll holders. I wrapped them in blue wrapping paper so they looked nicer.

Buy one of these cheap toothbrush holders. I found this at Wal-Mart for $2. It sticks to your mirror with suction cups and you can use it to hold toothpaste, toothbrushes, teaser combs and other combs. I have one at home and school.

Clip your hair clippies onto your hairbrush holder. This way, you can easily see them and access them for styling your hair.

For a cute way to diaplay stuffed animals like Beanie Babies, build them a a beanie ark. My uncle built this for me when I was little. You can fit tons of Beanie Babies on this. However, make sure to include two of every animal!

When travelling, save room in your suitcase by stuffing your shoes with socks, underwear, t-shirts, tank tops, etc. This is a big help. Let’s hope you have pretty big shoes to fill. haha

In this box, I squished a pair of pants, two long sleeve shirts and a sweatshirt. This is what packing looks like when you don’t fold or roll up your clothes. Don’t do this.

Much better! To save room when packing, tightly roll up your clothes. You can even use rubber bands to make sure they stay tightly rolled. You’ll be amazed how much space this saves.

The cheapest and best lip moisturizer around is petroleum jelly. My dermatologist recommended this to me in middle school and I’ve been using it ever since. Put some on before you go to bed and wake up with softer lips. It’s better than any chap stick or lip gloss.

A fun way to display rings is on a mannequin hand. I got this off eBay a few years ago. Bonus: You can practice manicures on this hand. It also comes in handy around Halloween or for pranks.

To remember which cord goes with what device, use a matching sticker. I put a blue sticker on the device and the cord. I also put a sticky note on it. You can also use a bread tab thing to mark the cord.
More Life Hacks:
http://dedalvs.tumblr.com/post/48998678919/99-life-hacks-to-make-your-life-easier
http://twistedsifter.com/2013/01/50-life-hacks-to-simplify-your-world/
Photos taken by Debbie.