I wanted to add this blog post to my online portfolio, here. I worked with our MedVet marketing team to create this.

This piece of content started when I reached out to our resident content pro, marketing team member, Debra who is a veterinarian. She’s like our subject matter expert. I asked her if she could help me write a blog post about how ibuprofen can be toxic to dogs. I’d heard from friends and family that people were giving their dogs ibuprofen, intending for it to relieve their pain, but instead, realizing it can be harmful to dogs. Debra wrote up a draft, chock full of valuable information to pet owners. I made some edits to the post to try and make it more targeted to pet-owners, rephrasing some of the technical terms and using laymen’s terms. Then the post was also revised and edited by my boss and my boss’s boss.

I reached out to our marketing team to ask if anyone would be willing to photograph their dog next to a bottle of ibuprofen, for this blog post. Jenn sent me these awesome photos the very next day. She assured me the seal was still on the pill bottle, so no dogs were harmed in the making of these photos. I love using photos from our team rather than stock photography. It helps distinguishes our content and helps us be a thought leader.

Is Ibuprofen Toxic to Dogs? Some commonly used medicines that are safe for humans are very toxic to pets. Ibuprofen is helpful to humans but harmful to dogs. Remember to always consult your family veterinarian before giving your pet any medicine, especially if it’s from your own medicine cabinet.

Ibuprofen is a nonsteroidal anti-inflammatory drug (commonly referred to as an NSAID- pronounced with the letter n-said). Ibuprofen is a popular and effective over-the-counter medication available to treat pain and inflammation in people.

What are other names of ibuprofen?

What is ibuprofen toxicity?

For dogs, ibuprofen can easily exceed toxic levels. Ibuprofen has a narrow margin of safety in dogs. Signs of toxicosis can occur when as little as half a 200 mg pill is given to a 25 pound dog.The most common cause of ibuprofen toxicity is a well-meaning owner trying to alleviate pain in his dog. The owner administers a dose he thinks is adequate without knowing that it’s a toxic dose. The most common toxic effects are to the gastrointestinal (GI) tract, kidneys or liver. What are the signs of ibuprofen toxicity?

In as little as 12 hours, signs of toxicity can begin to appear. The initial toxic effect is bleeding stomach ulcers. In addition to ulcers, increasing doses of ibuprofen eventually lead to kidney failure and, if left untreated, can be fatal. Symptoms of ibuprofen toxicity in a dog may include not eating, vomiting, black tarry stools, abdominal pain, weakness, lethargy, increased thirst and increased urination. Signs can range from mild to severe.

How does a veterinarian diagnose ibuprofen toxicity?

Diagnosis of ibuprofen toxicity is generally based on a veterinarian performing a physical exam and obtaining a history of access or exposure to ibuprofen. Blood tests are done to determine the overall health of the dog. If ibuprofen was ingested, blood tests may reveal anemia from a bleeding ulcer or abnormalities secondary to kidney damage.

How is ibuprofen toxicity treated?

Treatment will depend on the dose ingested and clinical signs. Veterinary care can include hospitalization with continuous intravenous fluids for one to two days. All steroids and NSAIDs need to be discontinued immediately. Activated charcoal may be given if ingestion was recent (less than two hours). Blood transfusion can be recommended in dogs with severe anemia due to bleeding ulcers. Stomach protecting medications are commonly given.

How do you prevent ibuprofen toxicity?

The best preventive care is to give your dog medications only if directed by your veterinarian.

Call the Pet Poison Hotline at 855-764-7661 and your family veterinarian immediately if you think your dog or cat has ingested any ibuprofen. They will be able to provide life-saving advice and treatment for your pet.

I wrote and designed this donor email newsletter for January 2019. I was inspired by an email I got from the epic Lori Jacobwith. It caught my attention because she used my name in the subject line and addressed me like an old friend “Hi Debbie.” I honestly did a double take when I read this email, like does she know me? I think the lack of images and simplicity of the email stood out. Inside the email, it read like we were best friends and she was speaking directly to me.

My first draft of the donor email was more text-heavy and included a call-to-action for donors to become monthly donors.

I shared the email draft with my team and our Director of Development noted that we should just say thank you and not ask for money in this email. We did include a subtle “PS” asking readers to watch our Faces of Hope video.

After changing the email, when it was sent out, several Volunteers of America staff members responded saying how much they appreciated this email and how it made their day.

A great way to kick off the year, by taking time to appreciate.  Thanks & will share the inspiration with my crew!

Every day, I’m humbled to be surrounded by your kindness. On behalf of Volunteers of America Ohio & Indiana, I sincerely thank you for allowing us to be an extension of your heart and hands, helping people reach their full potential and for helping our community thrive. Many wishes for a happy and healthy New Year.

It’s a bummer to see the summer months leave but at the same time, who doesn’t love the early signs of fall? Falling leaves, falling temperatures and the regular falling prices you’ll find only at one of our thrift stores.

You’re sure to find autumnal fashions your whole family will love, like jeans, scarves, vests or sweaters. And because our prices are so low, you’re able to buy fall clothing and accessories with money left over. But more importantly, shopping at Volunteers of America helps uplift homeless veterans, families and individuals across Ohio.

Save 50% on everything next week!

On Tuesday, Sept. 25, everything inside all of our thrift stores will be half-off! This includes furniture, showcase items, new products and miscellaneous items. It’s all 50 percent off! 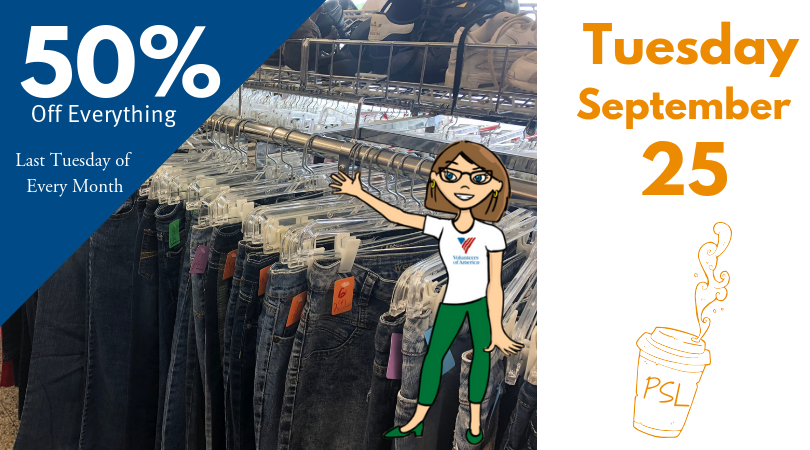 At work, I sent out this Thank You email today to everyone who participated in Operation Backpack this year and in previous years. I worked with Becky to revise the language and make sure the photo featured diverse kids. I’m proud of how donor-centric this email copy is. After I sent it out, Nicole replied to me saying “My favorite email!” which was a huge compliment. My mom texted me saying “Great Job” on this email and that some of the backpacks the kids are holding look like ones she and her company donated. That’s the reaction I wanted. Like hey, “That smiling kid is holding the unicorn backpack I donated. Wow, look how happy and confident he looks! I love Operation Backpack.”

You can also click here to see the email online

From: Volunteers of America of Greater Ohio [mailto:operationbackpack@voago.org]
Sent: Thursday, August 23, 2018 9:48 AM
To:
Subject: You deserve an A+ for your generosity!

You deserve an A+ for your generosity. 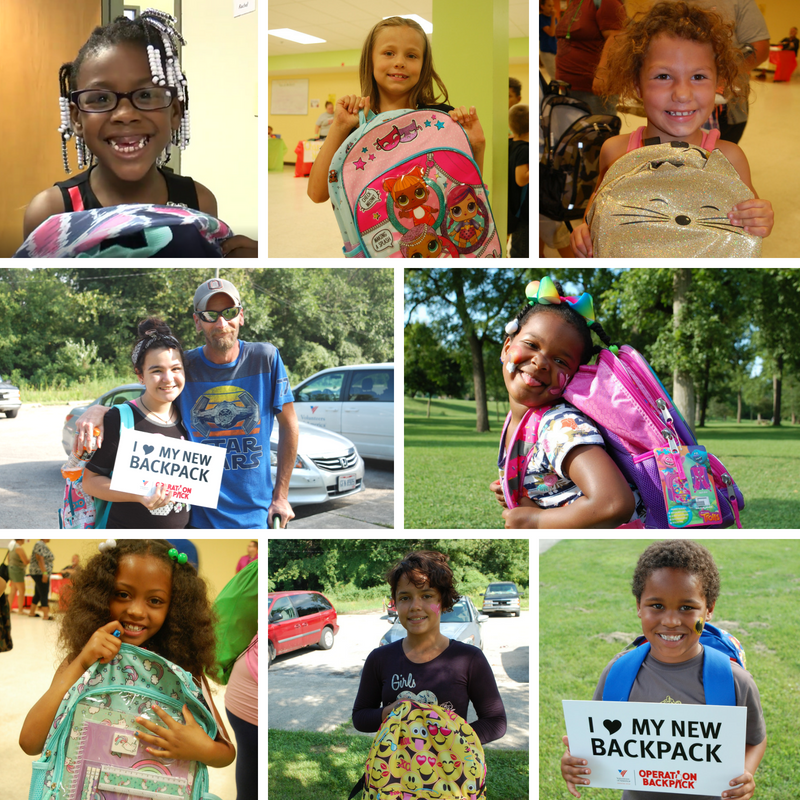 It’s a happy new school year for more children, because of you!

You’ve helped over 4,000 children across Ohio who are homeless or in-need start the new school empowered to succeed. Because of you, they’re heading back to school this year ready to learn.

The next time you see a child walking confidently to school, or a school bus of smiling faces driving by, know that you helped put smiles on some of those faces. You’ve given hope and confidence for a better tomorrow to children who need it the most. We couldn’t have done it without you!

Thank you for your support!
A special thank you to our wonderful sponsors.
You deserve an A+ for your help with Operation Backpack too!