Skip to content
October 21, 2018October 9, 2019 Debbie
Doodles about my crazy morning trying to get to Houston.
You catch more bees with honey than vinegar.
You’re capable of more than you think, especially when you’re not afraid to ask for help. 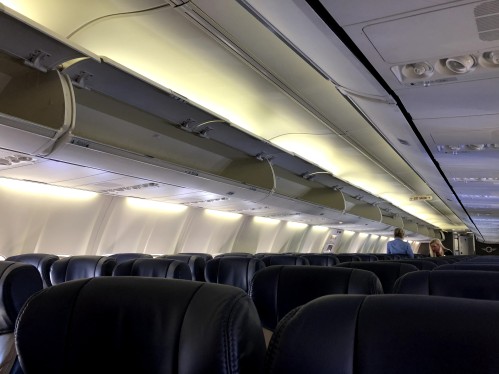 It started this morning at 6 am, when Nate drove me to the airport. I boarded my American Airlines flight at 8:30am, ready to head to Dallas where I’d have a one-hour layover then catch a connection to Houston. I was looking forward to seeing my Aunt Susan and the rest of my family. Then, I would drive to Dallas for a work conference.Sitting on the flight, about to take off, the pilot loudly announces that there’s an issue with one of the navigation instruments and that maintenance is looking into it. An hour goes by. The pilot comes back on to tell us they can’t fix it and we have to get off the plane. As we trudge off back into the terminal, a gate agent hands us pre printed postcards with a hotline to call and info about our options.
I’m naive about flying and honestly thought they would direct us to a new plane and the flight would leave immediately. I started to follow the people in front of me until I realized they didn’t know anything that I didn’t know at that moment. I’m such a follower. Instead of going to a new plane, we all stood in a long line waiting to speak to the gate agent to make other arrangements.
My first thought was panic. What do I do? I’m alone. I can’t do this. I don’t know. I can feel my breathing growing shallow and felt very aware of the other passengers all paired up, helping each other book new travel plans.
I texted my mom and dad to tell them what happened, looking to them for advice. My mom told me to talk to the gate agent. My dad told me to take a Southwest flight. He researched flights and told me about one that was leaving at noon. By now it was 9am.
I got a text message from American saying my flight to Dallas was delayed until 12:30pm. If I took that American flight, then I’d just be stranded in Dallas. I had a choice to stick with American, try to get rebooked somehow or switch to Southwest.

The guy behind me in the non-moving line to speak with a service agent, was talking about the 12:30pm flight and I asked if he knew anything more and he said he’d gotten rebooked by calling the 800 number. So, I put away my hesitation to call the 800 number and dialed. I politely gave the woman on the other end of the phone my record locator number. I think these phone reps have such a hard job and deal with so many jerks. The least I can do, is not be a jerk to them. Especially because I need them to help me. The representative told me there was a flight got Houston leaving at 3pm, laying over in North Carolina and arriving in Houston at 7pm. That itinerary sounded terrible. She said I could always cancel my reservation and book with another airline. So that was it. I called my dad and over the phone, we booked the Southwest flight. Scribbling on the back of my ticket I wrote down my confirmation number and my immediate to do list.

I ran through my list of people I needed to tell about this and then exited the American terminal. I could finally breathe easy, I’d overcome this hurdle.
Not yet. Dad texted me saying he’d booked the flight for tomorrow, not today. I stared at my phone in disbelief. This wasn’t happening.
My dad apologized and told me there was a similar flight available for today. I went to the Southwest Airlines gate and to my surprise, there wasn’t a line to speak with an agent. Instead of telling the representative the whole story of this morning, I said that I’d like to change my reservation. She pulled up my flight and I told her I’d like to be booked on Flight 38. I held my breath. I expected a firm “no, that flight is booked.” It would be too easy if this were to work. She looked up at me and said “yes, we can do that.” She printed my boarding pass and wished Ms.Gillum a nice flight.
And so, here I am, in the Southwest gate waiting for this new flight. Going thru airport security twice in one day seems like cruel and unusual punishment. I’m thankful for my smartphone, for decent strangers, for my dad helping me so much, for my Aunt Susan being flexible and for my work for being understanding.