Last night, I saw Beauty and the Beast at the Palace Theatre in Columbus.

It was part of the Broadway national tour thing they do where shows travel around the country.
It’s amazing how the crew can set up all the lights, flooring, props, and sets in such a short amount of time. The show was only in town for about 5 days. Traveling can be exhausting and so I couldn’t imagine being an actress and traveling then being expected to sing and dance all throughout the show.
Seeing the show was such a last minute adventure. I saw an ad for it in the newspaper on Sunday, asked Emily on Monday morning, then bought the tickets a few minutes later. The tickets were quite the splurge. The seats themselves were reasonable but all the service charges and Ticketmaster fees bumped the price up significantly. It was worth the money though. I’m glad I went.
I’d seen Beauty and the Beast in New York Clty when I was younger and it was spectacular. I remember the costumes were my favorite part because they were so feminine and frilly. Also, Gaston had huge muscles.
In this traveling production, the costumes were still gorgeous. But not like Broadway amazing. Gaston was buff but not like body-builder buff.
My favorite song of the musical was “Home” which Belle sings after she agrees to take her father’s place as the Beast’s prisoner. She sang it so beautifully. I remember listening to that song as a little kid on the purple Disney classics CD. Emily said that’s also where she recognized the song. It amazes me how similar we are sometimes. 🙂 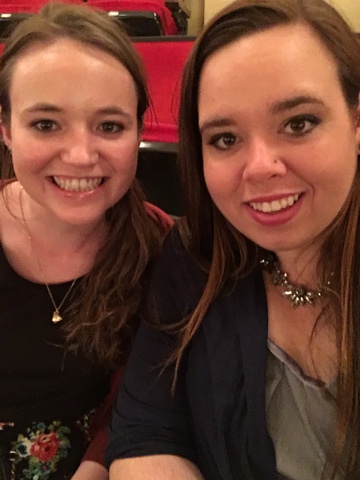