(This is just a work of satire, like The Onion)

A local Reynoldsburg girl named Rose Cinnamon excitedly shared with her Facebook friends a video of her dumping a bucket of ice all over herself. 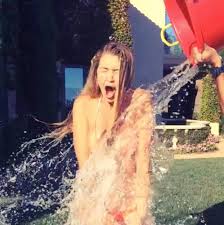 “I’m super stoked to be the first one of all my friends to be part of the SLA ice-bucket charity challenge to raise awareness of disease,” she said to her cell-phone camera as she shakily held the heavy ice bucket over her head.

As soon as she dumped the freezing water over her 112 lb body, she let out a blood-curdling scream and her white t-shirt from Justice immediately became transparent.

None of her “friends” had the heart to tell her that she butchered the name of the charity that she was supposedly helping.

At the end of the 3:33 min video, Cinnamon challenged her “BFFs” Carrie, Alexa, Shawn and he-who-must-not-be-named to also do the “pour-a-box-o-cold-water challenge”.

A few of Cinnamon’s 23 Facebook friends were quick to point out that the ice-bucket challenge is no longer cool.

“What the hell is this? I already did this last year. You cray if you think I soaking myself with ice again.” commented one of Cinnamon’s friends, Carrie Spice.

The ASL ice-bucket challenge was a cultural phenomenon that took place a long long time ago, back in the summer of 2014.

Reportedly, Cinnamon did not make a financial donation to the ASL Association, but instead filmed herself dumping a bucket of ice cubes over herself.