I’m in Boston for Inbound19! 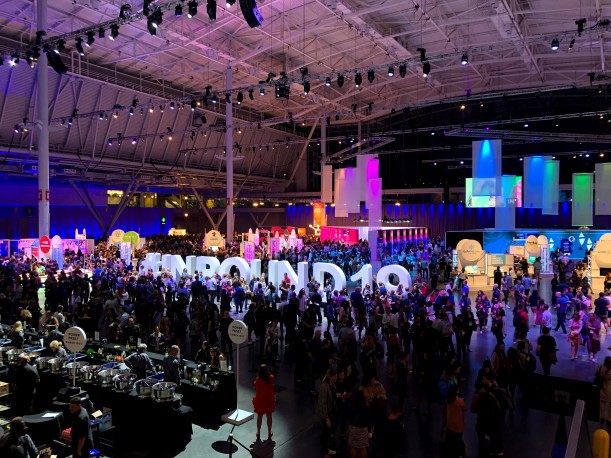 It’s exciting to travel to such a huge conference in the marketing industry. I’d wanted to go to Inbound someday and am thankful MedVet gave me this opportunity. I’m going to take so many notes to bring back to the team.

The kick-off welcome session tonight was by Elizabeth Gilbert, the author of that book and movie you’ve heard of: Eat, Pray, Love. I admit I haven’t read any of her books or seen the movie with Julia Roberts. I started both and couldn’t finish. So, I was hesitant that I would not enjoy nor get anything out of her session. I didn’t have much to base that assumption on, I just pessimistically had a negative assumption.

But, she really inspired me. She spoke from her heart about how writing has always been her passion. She moved to New York City to fulfill her dream of being a writer but was working so many odd jobs to pay rent that she didn’t have time to write. She told this to a mentor and the mentor looked at her and stated:

“What are you willing to give up to pursue the life you’re pretending you want?”

She then asked her more questions to prove her point: “What’s your favorite TV show? What are you reading? How was brunch with your friends this weekend? What’s your next vacation?” She was indicating that if Liz had time for those things, then she had free time to write. It was a matter of prioritizing. She needed to make her dream of being a writer her number one priority.

Then Elizabeth Gilbert talked about Relaxing. She said that this word is underused and undervalued. When you Google “relaxing” she noted that images of hot stone massages are mostly what appears. If you’re waiting to relax once you’re rich, sorry but rich people are stressed too.

She described a friend she met who whenever someone asked him how he was that day he would respond with “It’s gonna be alright.” He wasn’t answering their question (in fact, he was creating a new question) but there was something relaxing about his demeanor. He kept his shoulders lowered, didn’t get fired up easily, and took time to listen to others. I admired that guy and after her talk noticed myself trying to bring down my shoulders, take a deep breath and relax.

She said that in a herd of horses, the alpha is a strong mare who keeps the other horses calm. When she is calm, that behavior spreads. She remains calm because nobody messes with her. The other horses know they must ask permission from before approaching. her. She doesn’t need approval from any other horses nor does she let their fears or worries affect her. It was quite a relatable message from the animal kingdom.

Going off of that, I loved most what she talked about when she said you need to figure out your priorities. Draw a circle around you and protect that.

She described a moment in her life when she found out her partner was terminally ill. She canceled speaking engagements, canceled appointments and flew home immediately. She looked in her email inbox and deleted all the nonimportant emails, even if they were unopen. She prioritized her partner.

So not only did Elizabeth Gilbert totally prove wrong the assumption I had, she helped me think more about my priorities and what’s important to me right now. Thanks!