On Friday, Emily and I went to the Newport to see the New Politics concert. I was really excited because I’d seen New Politics in February with Monica and they put on such a great show. I think of them more as entertainers than musicians.

The concert started with SomeKindaWonderful, which was a cool band from Cleveland. I had listened to their song Reverse before the concert and when I first heard that song, I thought I was listening to The Shin’s “Simple Song” (no, seriously. listen to both of their intros and tell me they don’t sound similar.) The songs Reverse was stuck in my head the rest of the day until the concert. I thought the lead singer (Jordy Towers) was a good performer because he was so energetic and passionate. He looked like he would be a good rapper with a lot of swagger. They played a few songs in different genres so that was refreshing to me. Playing songs from other genres made me think they were musically talented. I liked their guitar player (Matt Gibson) because he played pretty much every type of guitar and they had this cool girl (Sarah Dyer) play the tambourine and dance.

The next opener was Bad Suns. I would’ve gone to a show to see just them alone. I love their song “Cardiac Arrest” so much. I’d listen to it every day senior year walking back from the library. At first I was loving them but they did a really long set and in the middle all of their songs kind of blurred together so that was disappointing. The lead singer was really gorgeous and sounded great so I wasn’t too bummed. They ended their set with “Salt” and “Cardiac Arrest” so that was amazing to hear. Their guitar players had such long hair you couldn’t see their faces. They were off in their own worlds. The one guy was playing into the speaker which I thought was weird. And, their drummer reminded me of Animal from the Muppets and Quasimodo.

New Politics opened with “Tonight You’re Perfect” which was such a great high energy song to open with. Everyone was so pumped.

I brought my Danish flag and when we waved it, the lead singer pointed to us and said something to the crowd about how they are from Denmark and he said “That’s good” in Danish. Awesome.
At one point,  Søren Hansen, the guitarist hopped on the piano and sang a slowed down version of “Stuck on You.”
Just like in the last concert, David Boyd, the lead singer, break danced, climbed up on the speaker and took his shirt off. Let me repeat that: he took his shirt off. Omg.  He also crowdsurfed. But most importantly, he took his shirt off. I’m sure at least three girls somewhere in the crowd fainted. 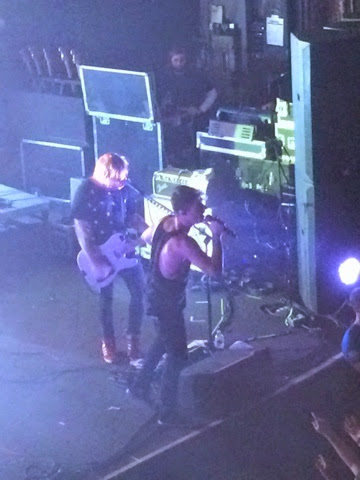