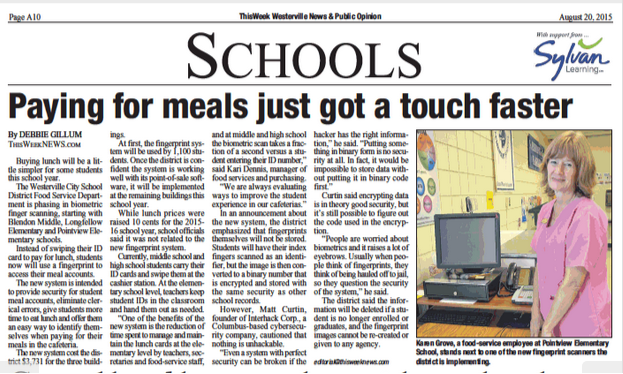 Buying lunch will be a little simpler for some students this school year.

Instead of swiping their ID card to pay for lunch, students now will use a fingerprint to access their meal accounts.

The new system is intended to provide security for student meal accounts, eliminate clerical errors, give students more time to eat lunch and offer them an easy way to identify themselves when paying for their meals in the cafeteria.

The new system cost the district $3,731 for the three buildings.

At first, the fingerprint system will be used by 1,100 students. Once the district is confident the system is working well with its point-of-sale software, it will be implemented at the remaining buildings this school year.

While lunch prices were raised 10 cents for the 2015-16 school year, school officials said it was not related to the new fingerprint system.

Currently, middle school and high school students carry their ID cards and swipe them at the cashier station. At the elementary school level, teachers keep student IDs in the classroom and hand them out as needed.

“One of the benefits of the new system is the reduction of time spent to manage and maintain the lunch cards at the elementary level by teachers, secretaries and food-service staff, and at middle and high school the biometric scan takes a fraction of a second versus a student entering their ID number,” said Kari Dennis, manager of food services and purchasing.

“We are always evaluating ways to improve the student experience in our cafeterias.”

In an announcement about the new system, the district emphasized that fingerprints themselves will not be stored. Students will have their index fingers scanned as an identifier, but the image is then converted to a binary number that is encrypted and stored with the same security as other school records.

However, Matt Curtin, founder of Interhack Corp., a Columbus-based cybersecurity company, cautioned that nothing is unhackable.

“Even a system with perfect security can be broken if the hacker has the right information,” he said. “Putting something in binary form is no security at all. In fact, it would be impossible to store data without putting it in binary code first.”

Curtin said encrypting data is in theory good security, but it’s still possible to figure out the code used in the encryption.

“People are worried about biometrics and it raises a lot of eyebrows. Usually when people think of fingerprints, they think of being hauled off to jail, so they question the security of the system,” he said.

The district said the information will be deleted if a student is no longer enrolled or graduates, and the fingerprint images cannot be re-created or given to any agency.