Have you heard of Twenty One Pilots? If you’d asked me that a couple months ago, I would’ve said no.  I first heard their song “House of Gold” on the radio, in my car. I had just parked and was about to get out but that song came on. I immediately loved the ukulele sound and simple lyrics. I used the Shazam app on my phone and was surprised when it told me that it was by Twenty One Pilots. I went on Spotify and listened to more of their songs, expecting them to be similar to “House of Gold.” You can imagine my surprise when I hear a song like “Holding on to You” and there’s hardly any ukulele. Instead, it’s like really fast paced and almost rap. I’m really intrigued by Twenty One Pilots for two reasons: they are from Columbus (where I’m from) and their songs are so refreshing and unexpected. Usually when you hear a song on the radio, the rest of the songs from that album will sound just like that one (cough Train cough). But not these guys.  I think it’s uber cool that the duo has made it big and came from Columbus. I wonder where exactly in Cbus they are from.

Today I got their album Vessel from the Columbus Metro library and listened to it in my car as I drove to Macys to do some last minute holiday shopping. I’ll admit I skipped the first song “Ode to Sleep” because I was turned off by the angry rapping. I’m not a fan of that Eminem style fast mad rapping. I’ll tolerate the Macklemore style rapping which sometimes Twenty One Pilots does. I recognized the second song on the CD “Holding on to you” and liked it a lot, especially because there is a part when Tyler Joseph (the lead singer) says “Lean with it, rock with it/ when we gonna stop with it/ lyrics that mean nothing, we were gifted with thought/ is it time to move our feet to an introspective beat?/ it aint the speakers that bump hearts, it’s our hearts that make the beat.” I first heard these lyrics when I was shelving in the library, listening to a fun. station on the IHeartRadio App and they caught my attention because he’s rapping about pop music in a pop song. Whoa. I think that he’s frustrated with the frivolous pop lyrics from other artists (“Lean with it rock with it”) and he wants more meaningful songs to be written (“we were gifted with thought”) I totally agree. 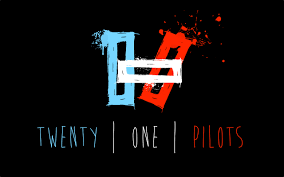 Songs like “Car Radio” and “Semi Automatic” seemed so personal. They revealed a man who wasn’t okay and was struggling. I appreciated their honesty.

Throughout the album, I noticed how the lyrics are really well-written, especially in songs like “Guns for hands.” They reminded me of Bo Burnham’s lyrics in the sense that they often had double meanings or were play on words. Clearly Joseph knows how to write poetry or lyrics.

I can’t honestly tell you that I absolutely love Twenty One Pilots but I’m still intrigued by them. I’d love to go see them in concert and learn more about who they are.

—
In other news…I finally got the laptop lock off my laptop!   I’m free from that annoying silver blob that poked me every time I lifted my computer.